Having ignored two of Britain’s best trail centres and grovelled my way up a massive climb, I’d seen not a soul for hours and was knackered. Was the Gypsy Glen descent going to be worth it?

Can we do the fun bit now?

I felt much more chipper about things after a pasty and some fruit. From my lunch spot I couldn’t see very far as I’d opted to stay out of the wind. But the peace and quiet were remarkable. There were no birds, no large animals and no people. The only people I’d seen since leaving the road were in aeroplanes high above. There was a real sense of placidness about this place. However, I wasn’t here to indulge a need for mindfulness. I was here to ride my bike, to experience the famed Gypsy Glen descent. Time to do that. 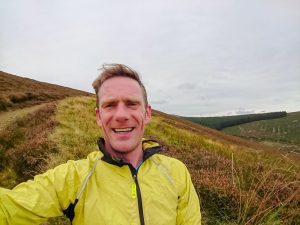 Lets get on with this

One of the fears of a ride like this is that you spend ages climbing to the top and then the descent is rubbish.

I remember riding Hawkcombe in Exmoor a few years back and had a similar feeling then. Phil had blown a gasket and had to be towed the last few miles to the top with promises of a great descent. I had no idea, other than the articles I’d read in praise of it, how good it really was. Phil was toasted and unconvinced. The top was unprepossessing but, about twenty yards in, all doubts were brushed aside as we whooped our way towards the sea.

I was hoping for the same here. No pressure. There’s a reason why it’s a classic, and it’s not the climb.

Good things come to those who wait, naturally

There was still a little more climbing to do, and that took me above the wind shadow of the ridge. I was suddenly confronted with the aftermath of storm Ali and glad I’d chosen to put a coat on. This did not bode well…

…But slowly, and almost imperceptibly, the gradient eased off and then began to point downhill. Not hugely, but enough to drop the saddle and stand up, grateful just to stop pedalling for the moment. Then it got steeper, it was loose and rocky, reminiscent again of Exmoor. Just enough for the wheels to start to pick up speed, then just enough to pop the front wheel off little lips in the trail. This was fun. It wasn’t flowy, and required constant concentration to ride onsight but it was definitely fun. Rocks began to fly up from under my wheels as I contoured down the hillside. The sweeping curve of the hill tightened into a left-right chicane that plunged me down to a rocky ford and spat me out of the other side, slightly unsure how it had happened and that I hadn’t been thrown off somewhere. 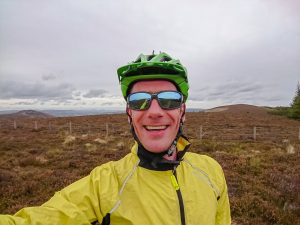 The top at last

I was actually smiling.

This is why I love natural trails: there’s no knowing what’s just around the corner.

Inevitably, what was just around the corner was the slight climb up to the top of Kirkhope Law. Actually, it wasn’t all that bad. Just a gentle rise to the rounded summit. Looking back, I could see the path I’d climbed up out of the forestry on, past my lunch stop and down to the ford.

Looking ahead, finally, the vista opened up in front of me. And what a view! I could see denture-like tops away in the distance, the rolling hills of the borders in between, Peebles nestled down in the valley floor. 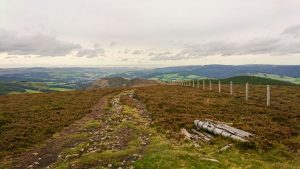 Gypsy Glen all downhill from here

Oh, wow! Snaking its way down the spine of the ridge was what appeared to be miles of downhill singletrack: the famed Gypsy Glen descent. All the climbing was behind me, laid out in front was the rest of the day. I was on top of the World!

The only thing missing was someone to share being lost for words with. Actually, it was pretty chilly, and the wind was biting. So, I didn’t hang round any longer than needed to take a few photos and got on with it.

The natural way down

It took about twenty yards for the pain, the disgruntlement and the potential tantrum-throwing to be washed away.

The trail braided into three or four interwoven paths, some a bit rocky, others smooth. They changed all the time forcing me to choose my line with care to avoid running into the occasional larger chunk of rock. It never felt like I was going to slam into something and launch over the bars, but there was enough going on to keep me from letting go of the brakes entirely this time round.

It swung back and forth as the gradient fell away in front of me, letting me launch of the lips that occurred every now and again. I was having fun. Right up until I whammed the anchors on to stop me plunging into a bog. I stopped inches short. 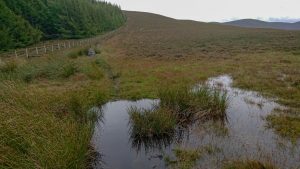 Then it was a little more climbing up to Kailzie Hill followed my more descending. Flying along the ridge, I was absorbed but never terrified by the trail. There was enough going on, and enough hidden from view that rocketing along that I never felt completely comfortable just plummeting. This time.

And fly out of the other side of the hollow. 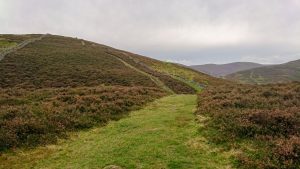 Just came down that!

It’s only natural: a sting in the tail

I stopped at the gate. The main Gypsy Glen descent trail went straight on, heading for the end of the ridge.

I wasn’t going that way: I’d had a tip-off that there was good riding to be had just off the main droveway. As long as I was prepared for a little more climbing.

I was, but pushing rather than riding.

On top of Craig Head, Peebles was laid out before me. A small scuff in the long grass indicated the way ahead. 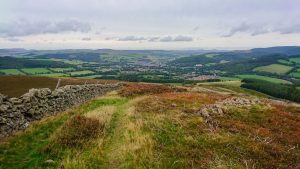 The edge of the world

Rolling along the path steepened suddenly, repeated blind crests meant that I could only five or ten yards in front of me. Beyond that, who knew? Apart from increasing steepness, probably. Blind crests were now accompanied by blind corners too. I dared myself to go faster, then reeled it in again when the consequences of a mistake were remembered. Then I allowed myself to pick up speed again, only to be met with another blind, off camber, corner. Everything was different to the drove road. Everything was brilliant. Taking my eyes off it for a moment was asking for a disaster.

Hitting the main droveway again, everything changed again. Now it was steep grassy lane, swinging sinuously left and right. I was right at home on this, allowing the bike to move back and forth, testing the limits of traction on the damp grass, manualling off the small humps and bumps in the trail.

It was breathless fun, daring myself closer and closer to warp speed. Duck under the tree, pick a terrace line round the bend. Stop before the gate.

STOP BEFORE THE GATE!

Through the gate and into a tree lined lane. The gradient was more benign, there were fewer curves. For the first time in abut an hour, I could just roll along, relaxed. Carrying enough speed that pedalling was unnecessary.

Then back into the trees, and it suddenly steepened again. This time with steps. I briefly thought about rolling through and braking afterwards. Then I realised that the run-out at the bottom was a river. I had no idea how deep the river was.

I stopped six inches short of the river bank.

Time for a break. And what a place for it: a beautiful little glen, filled with trees and a bridge over the river that I could dangle my feet off. This was the perfect place for a second lunch. Warm, dry and gorgeous. 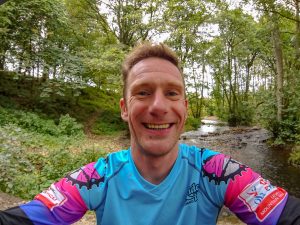 Does this rider look happy?

Then to see if the river really was fordable. Important for a return trip. It was. Mostly.

From here, it was a case of finding y way back to the river and rolling along the other half of the tweed Valley Cycle Path. A couple of detours onto sweet singletrack reminded me why I love Scotland’s access laws. Especially one bit where a mistake meant plunging into the Tweed.

Tiredness was setting in now. My legs were jaded, my arms were feeling the pummelling from the descent. I needed cake.

Why is the Gypsy Glen descent famous? Because it’s like this

Having eschewed the delights of the trail centre earlier, I was not going to resist the charms of its cake and hot chocolate if I rolled past the gate. 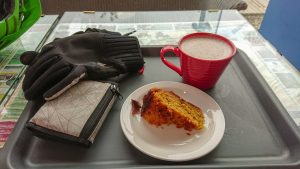 What a way to finish a magic ride. Classic is a word that gets bandied about a lot, especially in mountain biking. But the Gypsy Glen descent is a stone-cold classic natural ride. You’ll be out on your own most of the day and it’s a long way to help if anything goes wrong. It’s hard work to get up there, and it keeps you working the whole way down. But I guarantee, you’ll be smiling when you reach the ford.

You should go there.