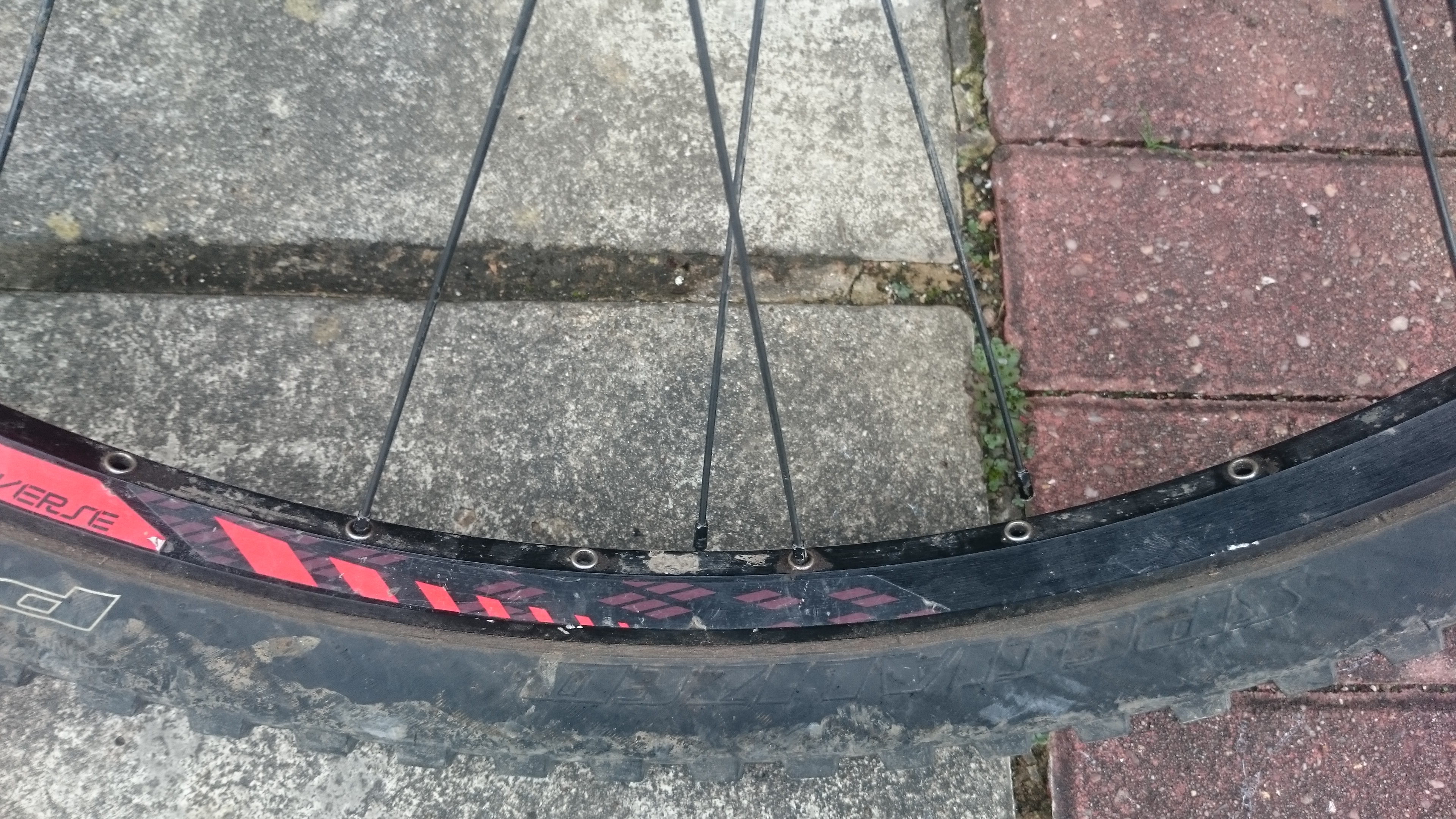 On the way home from my recce ride yesterday something awful happened.

I rode down a flight of steps. It’s a flight of steps I’ve ridden down loads of time before with no ill effects. Not this time. No, this time there was an awful noise from the back wheel. A nasty, nasty noise told me that something was amiss.

I stopped and looked at the offending wheel. It was pretty clear I’d sheared off a spoke at the nipple. No bother really. It’s irksome but nothing more than that, so I carried on riding. As I carried on I realised that the back wheel was all over the show.

I stopped and looked down. The sight that confronted me was downright upsetting. I hadn’t snapped a spoke, I’d snapped four. A quick bit of mental arithmetic told me I was missing one eighth of my total spoke count at the back. That’s a real loss of structural integrity.

I don’t think I’ve ever had a more nervous ride (with the possible exception of my old daily commute and the odd rocky descent in Scotland) as I expected my back wheel to fall apart at any moment. Fortunately, I made it home in one piece.

Riding home with broken spokes was just the start of my bother. 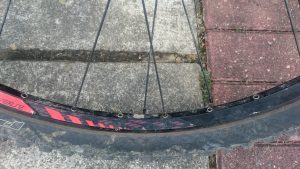 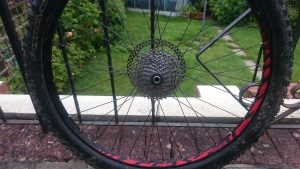 All fixed and good to go

No, repairing it would be the real pain in the backside. As you’ll remember from a similar situation last week. I really love re-seating tubeless tyres.

So, with a handful of new nipples in hand I set about it this morning. It turns out that the original broken spoke count was wrong: I actually had five spokes sheared off. Oh well.

Having got through that, and chased a dropped nipple round the inside of the rim, everything went smoothly. In fact….[goes to check]…it’s still up. 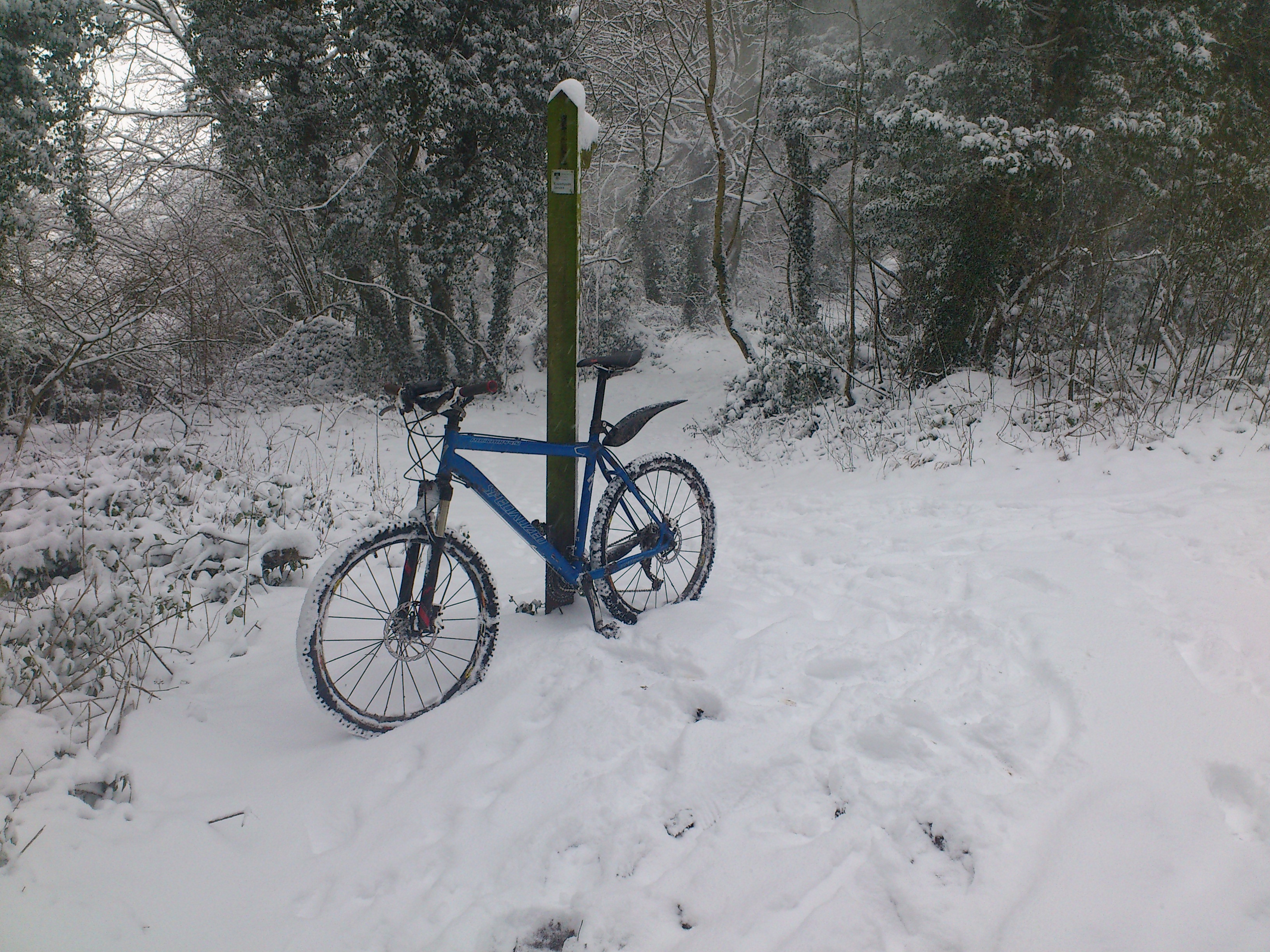 Not having the latest bike is not an obstacle to getting out and having a blast is the real lesson of the day.

Really? You’re going to open that can of worms? 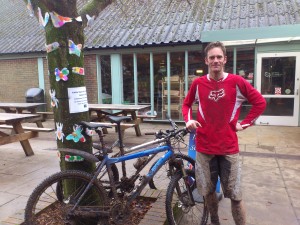 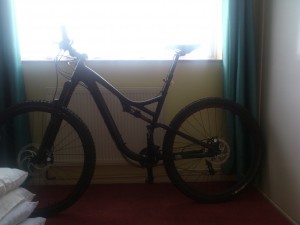 In the summer of 2014, after years as a hardtail abuser, I upgraded my bike to the highly rated Specialized Stumpjumper Comp Evo (henceforth just called “Stumpy”) . I loved it. It is better than my old hardtail in almost every way, with the possible exception of the Formula brakes. It makes me a better rider, a more adventurous rider and a faster rider. It’s brilliant. My old hardtail sat in the bike shed unloved. No amount of telling my wife “I’ll use it in the winter” or “I’ll ride it to the pub” actually got it off the rack.

In December I found myself with time to ride but with the stumpy temporarily off the road. With a certain amount of trepidation, I got the hardtail off the rack, dusted it down, tuned it up and went for a ride. It’s an old Specialized Rockhopper, though the frame and the shifters are the only original components now. It’s a completely different bike: no rear suspension, 3×9 gearing, 100mm fork, no dropper seatpost and smaller wheels. How would it compare? Could I still ride it or would it end up in the hedge in frustration?

In its defence the trails were mucky as hell though, in the interests of fairness, it did have the same Storm Control tyres on so this was never going to be a fair test.

It was interesting. Initially, I found myself fuming every time I reached for the shift levers in the wrong place. When I got used to that, my attention turned to not being able to drop the seatpost without stopping (so I didn’t), which made a difference to how I rode. That dialled in, my attention was turned to the difference the wheels made.

That’s when it got really interesting. A lot is made of how much nippier 26” wheels are compared to 29ers. I’m not sure how much I noticed it going down a size, I suppose I’m used to using more energy to lean the bike over but it may have contributed to the second phenomenon. The grip, or lack of it. I lost count of the number of times I loaded the bike into a corner only for it to begin to slide away from me which took some getting used to. Was it the smaller contact patch or me using too much energy to lean the bike over? I’m not sure I could say for definite. But the difference was significant.

However the real question is: did it end up in the hedge? No. In fact, I thoroughly enjoyed the ride. I’d forgotten how much fun it is to ride. It was like meeting a friend I’d not seen for years and picking up the conversation where we left off. It was great fun. It goes to show: actually the joy comes from getting out and riding, not from riding the best bike there is. It also shows that, certainly in the woods round here, any bike is a good bike if you ride it with the right attitude.

So, for a fun ride, so long as it’s in working order, whatever bike you have is good for a ride. Check out Backpedalling’s shorter rides for a fun introduction to the local trails.

I should admit, for the record, that I haven’t ridden the Rockhopper since I got the Stumpy back up and running: it is just more capable. I am, though, looking for a dropper seatpost for it. They really do make a difference.